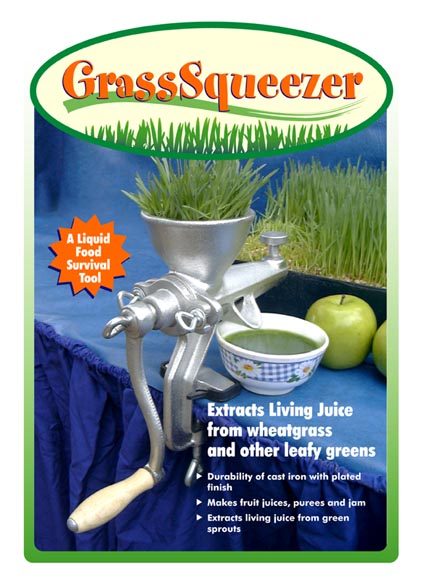 WHY INCLUDE A MANUAL JUICER IN THE SOS EMERGENCY CONTAINER?

Why Juicers -to juice living greens?

Health in todays world is something that is becoming increasingly difficult to maintain, life can only come from life, and a major part of our diet in this fast world, is dead or processed food, with a very low content of antioxidants.
Everything we eat or drink has been compromised in some way, due to processing and preservation procedures.
It has become very clear that unless we take action as individuals and take responsability for the well being of our bodies, that a weakened immune system will allow infections and disease to manifest.
Dr. Norman Walker wrote many books on the importance of the cleansing ability of fresh juices containing enzymes , from slow turning juicers, and to prove that it works.
He lived to 109 years of age, while being fully active to the end.
After curing himself of terminal illness, he went on to write many books on health and longevity, based on drinking large quantities of fresh fruit and vegetable juices, from specialised juicers, he stressed the importance of natural preservatives called antioxidants in preventing the random damage of ageing that results largely from oxidants in the body.
Uncontrolled oxidants such as free radicals 'burn up' tissue, and are the enemy of life giving enzymes.
In electrical terms, free radicals electrocute cells and molecules, and antoxidants short-circuit free radicals.
Oxidation of foods, especially fat and oils, produces chemicals that are mutagenic (mutation causing), carcinogenic (cancer forming), immuno-supressive and clot promoting.
The drinking of fresh juices, from slow turning juicers, helps keep us young, while most bottled juices would not have the same effect, being often oxidising in nature.
We note that the simple addition of Spirulina powder to water, also makes it an antioxidant, but, fresh is always best! (Excellent to add to your juices for extra nutrition)
According to Dr.Bernard Jensen, none of the blood builders are superior to green juices and wheatgrass, extracted with slow turning juicers.

In the event of personal shock conditions prevalent during disaster recovery - natural foods will assist bodily functions and maintaiin a better level of wellness.

Much larger worm wheel (auger) and barrel, that is extra efficient and can do most things the electric juicers can do, a pleasure to use, as it pulls in the grass and does every thing you would expect from a good quality hand juicer, including homogenising, blank plate supplied.
Grade 304 st/steel. 5 years warranty all parts. This enhanced version has extra strainers compared to basic BL-30 sold elsewhere.
Quicker and easier to clean than the other two models.
The unit is excellent for grass and all leafy greens, parsley, apples, celery, etc, but is less efficient with hard root vegetables like carrots which must be cut length wise in strips.
200 mg of wheatgrass gave us approx 126ml of juice, results can vary slightly from juicer to juicer, close to electric juicers. 5 years warranty.
The best and most important general purpose survival tool one could have in difficult circumstances, as it can juice all natural grasses and herbs commonly found over most of the world.

Few people know that the best way to build maximum immunity to massive electromagnetic radiation from microwaves (mobile phones), electrical equipment (computers) and potential nuclear fallout that can be blown towards us from other parts of the world, is to eat and drink more GREEN, it also increases resistance to disease generally.Stainless steel extra efficient wheatgrass, fruit and vegetable juicer, model BL - 30B, (enhanced version includes $20 extra parts)
This unbreakable juicer does all tasks very well and pulp does not prematurely build up blocking the strainer.
This model B includes extra strainer with big holes for fruit and new feature now added, a blank strainer, now allowing this unit to homogenise or puree to make nutbutters including peanut butter, or even banana ice cream,
the possabilities only limited by the imagination.
Built to last, with a 5 year warranty. Will attach to a maximum thickness of 45 mm bench size.

The very best of manual juicers..and made in Australia, with some imported parts, the actual body is made locally.
A pleasure to use, as it stands amongst the best, using the well proven extraction system similar to Samson single auger electric juicers. 3 Year warranty. 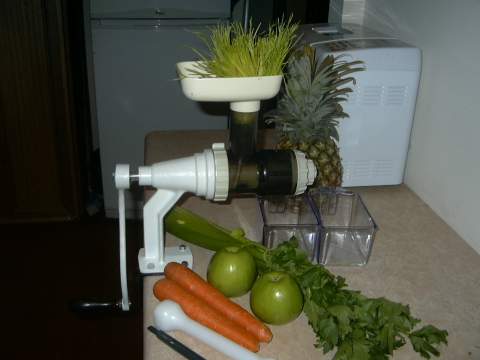 The Rolls Royce of manual juicers, the VEGIE SQUEEZER, now becoming very popular for those that do not like to depend on electricity too much, this model not only has the larger capacity, but it also has a solid clamp down bracket, that firmly grips around your bench edge, all you need is a light overhang on the bench, as shown, opening size about 60mm, largest of any manual juicer.
Very easy to use and clean, and again it uses the same type juicing mechanism as used on the more expensive electrical juicers, imported from Korea.
This drive part has been made in Australia and used with a standard juicing assembly, while the body is full cast aluminium with steel shaft, nothing to wear out or break, engineering and assembly 100% Australian.
When using other manual poly juicers, parts can break in time, but not on this model!
The price includes full juicing assembly, made from tough poly carbonate, pusher and brush.
Any two small bowls or glasses can be used to catch the juice and the pulp.
Note that the unit can also homogenise, meaning it can break down the softer nuts like walnuts, almonds and dried fruits like figs and dates or even make your own peanut butter.
(add some organic vegetable oil to increase flow ability and smoothness)
Extra homogenising blank replacement cone (used with nozzle removed) now included.

Milling your own flour allows you to ensure that you are taking in the maximum amount of fibre and nutrition in your home milled flour, how else can we get quality bread in Australia?

Commercially milled flour lacks fibre and nutrition, and has no bran, according to Denis Burkitt, in his book, "Don't Forget Fibre in your Diet", and suggests that the western world has a serious constipation problem, leading on to many other ailments of the body.
He further explains how most common western diseases are related to a lack of bulk in the diet, mainly due to modern milling procedures which remove the bran and the nutritious germ from the wheat kernal.

Burkitt shows the contrast between Western and African diets, appendicitis and major colon diseases are almost totally absent in primitive African regions.
He also discovered that the intestinal transit time for evacuation of faeces varies from 35 hours in the African Bantu consuming coarse grain fibre to 77-100 hours in the Englishman who lacks it!
Along with slow transit due to absence of fibre, the increased use of white bread and sugar have altered the bacterial nature of intestinal flora.
In consequence, intestinal pressure increases along with colon diseases

From Grasses and Weeds

While not so pleasant to the taste buds, fresh young grasses and green edible weeds have a much greater survival potential than the vegetables commonly used for juicing.
In particular, they are higher in their content of life force and enzymes.
Instead of working hard to maintain a big vegetable garden, it may be easier and healthier to let a large part of the garden overgrow with suitable grasses and edible weeds.
An additional advantage of young grasses is the short time and minimal care required to grow them as compared to growing vegetables.
You can harvest grasses in two to three weeks compared to several months for vegetables.

Best known is wheat grass, but possibly all fresh, young grass grown in good soil has similar healing and rejuvenating qualities, though the flavour and toughness may differ greatly.
Barley grass grows more vigorously than wheat grass and tastes good.
Young Rye grass (not the cereal rye grain), grown by farmers as pasture, has a pleasant flavour and can give you several months of repeated cutting from one planting.
Most animals live on grass either directly or indirectly.
It is the perfect food, not for only grazing animals, but also for humans.
The juicer replaces the complicated cellulose digestion of grass-eating animals.
Grass juice may be the food with the greatest healing and rejuvenating potential; it could even sustain us during famine.